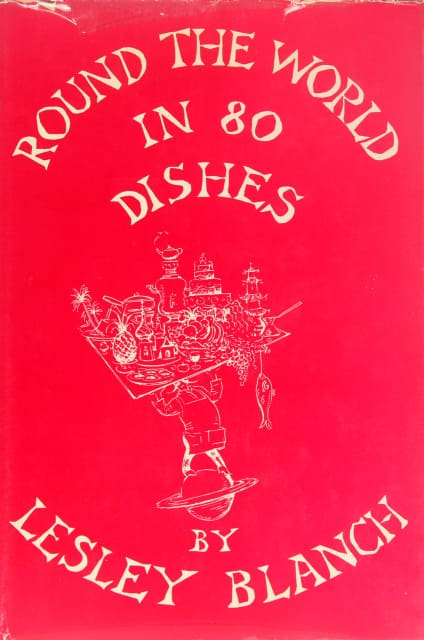 Round the World in Eighty Dishes, Signed by Lesley Blanch

SKU:
$125.00
$125.00
Unavailable
per item
[Signed] Blanch, Lesley. Round the World in Eighty Dishes. First English Edition. 1956. Book and dust jacket are both in very good condition. Book is inscribed, “For Dr. and Mrs. John Aldes, Elizabeth’s friend, whom the author hopes will enjoy this kind of trip around the world. Lesley Blanch Gary, Hollywood – Dec. ’57.”

Tastemakers today who write cookbooks are called domestic goddesses. Though Lesley Blanch, the author of The Wilder Shores of Love, often approached the divine, there was nothing domestic about her. Deeply romantic, she traveled the world, delighting in the variety of flavors and smells, no matter how exotic or remote. Here she has produced a cookbook as travelogue, with conversational-style recipes that make up for in romance what they lack in specificity. Its charming pen & ink illustrations are also by Blanch.
“White in America they overdress their salads, in England salad is generally undressed to the point of nudity, and apt to be interpreted as large wet lettuce leaves . . . all floating in water and vinegar, and thus unfit for man or rabbit.”
--Lesley Blanch
Sold Out
Add to Cart