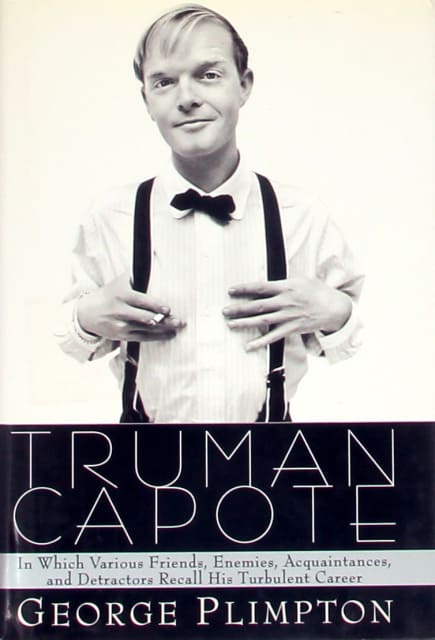 [Signed] Plimpton, George. Truman Capote in which Various Friends, Enemies, Acquaintances, and Detractors Recall His Turbulent Career. First Edition. 1997. Book and dust jacket are both in very good condition—there is a tiny stain to the page edges, and jacket shows a trace of yellowing and minor edgewear. Book is signed “George Plimpton” on the title page.

This is an oral history-style biography written in the manner of Thackeray or Dickens—Truman Capote as the protagonist of a Victorian novel. It is a given that Capote is fascinating, but just as compelling are the interviewees, who in discussing relationship with Capote, reveal as much about themselves as they do about him. Participants included Lee Radziwill, Gore Vidal, Diana Vreeland, and many others. It is also a portrait of New York, as the city transitioned from café to disco society.

“Alcoholics are almost always charming. They have to be, because they have to keep making new friends.”