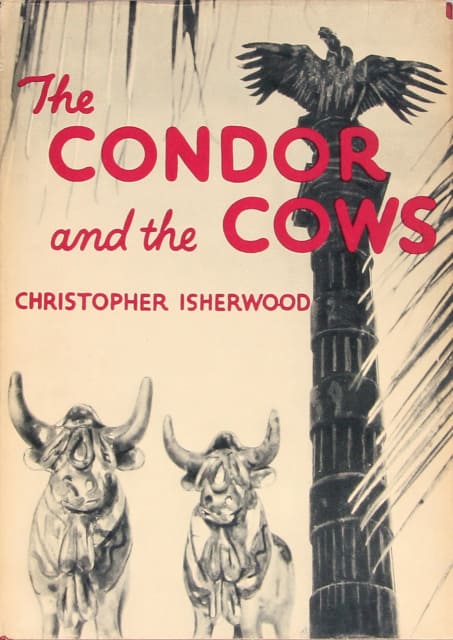 Christopher Isherwood, The Condor and the Cows

Isherwood, Christopher. The Condor and the Cows. First English Edition. 1949. Book and dust jacket are both in very good condition—book has occasional light pencil marks, and jacket spine shows a repaired tear. Photographs by William Caskey.

This is the midcentury travel diary of a six-month journey through South America by Christopher Isherwood and his friend William Caskey. They travel from Venezuela to Argentina, hitting every major country except for Uruguay and Brazil. The condors of the title refer to vertiginous countries nestled in the Andes and the cows to the plains regions of Argentina, but there is an alternate, macabre connection between the two animals (described on page 110). The book includes ninety-four gravure images of photographs of their journey.

“The condors disappeared—to get help, apparently—for they returned a few minutes later with twenty-five others, and all of them swooped down upon the pack-train. In the confusion, two horses fell over the precipice; their rides jumped down just in time. Condors will peck the eyes out of cows and then drive them with their winds off the edge of a cliff; the cows get killed and the condors eat them.”