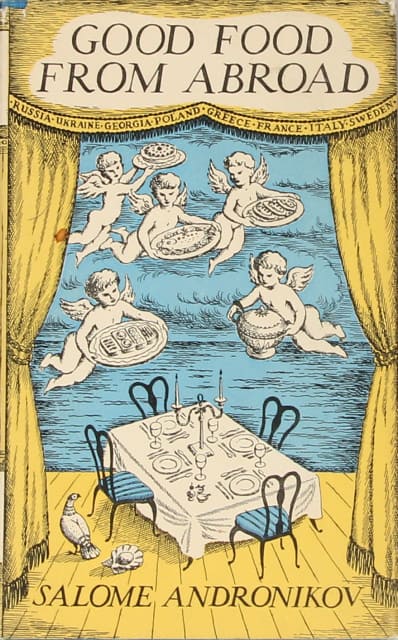 Andronikov, Salome. Good Food from Abroad, From the Caucasus to London via Moscow. First Edition. 1953. Book and dust jacket are both in very good condition—endpapers show discoloration. Preface by Vera Traill.
Salome Andronikov presents a cookbook as exotic as her name, with recipes inspired by the foods of Italy, Russia, Sweden, the Caucasus, Poland, France, Greece and the Ukraine. Madame Andronikov was born in Czarist Russia, but fled to France after the Revolution. She was living in the U.K. when this book was published. Frustrated by post-World War II shortages of both staff and rations, she sought to redefine the grand cuisine of her youth, condensing their preparation times and reducing their cost to make them palatable to the contemporary chef.

“[T]he Georgian Chikhertma [is] a revelation, the kind of recipe one would be tempted to keep secret from one’s friends, because the soup looks and tastes like a work of art.”
​
--Vera Traill