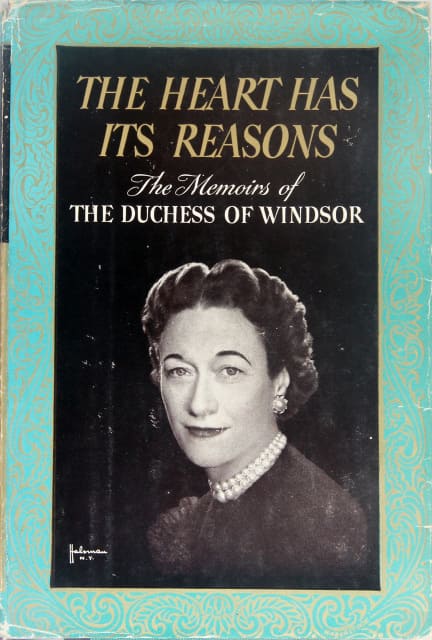 The Heart Has Its Reasons by the Duchess of Windsor

Windsor, Duchess of. The Heart Has Its Reasons. First American Edition. 1956. Book is in very good condition; dust jacket is in very good minus condition—jacket shows minor fraying and small edge tears, and the price is marked out on the front flap.

Following the success of her husband’s memoirs, the Duchess of Windsor wrote her version of the romance that captured the world’s imagination. With surprising candor and self-deprecation, she discusses her Southern upbringing in Baltimore and the scandal she caused by divorcing her first husband, which was of course, followed by her second divorce that created even more of a stir. Social Historian Cleveland Amory quipped, “You can’t make the Duchess of Windsor into Rebecca of Sunnybrook Farm.” However, why would anyone want to?

“Never having previously lived under a monarchy, I found it difficult to fathom the state of mind that accepted it as an axiom that the King could do no wrong.”