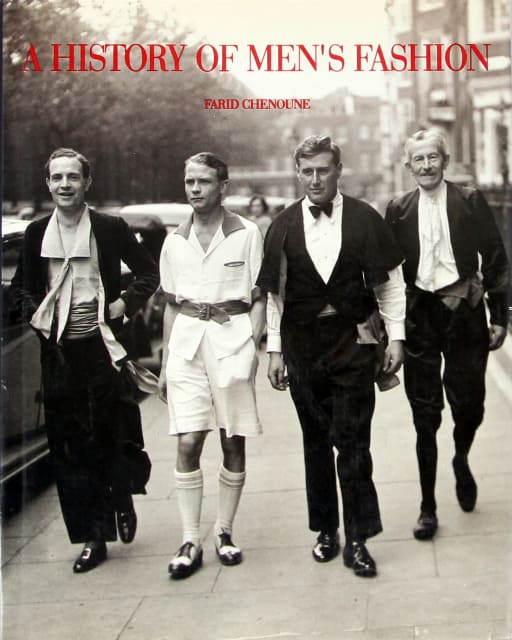 Chenoune, Farid. A History of Men’s Fashion. First American Edition. 1993. Book and dust jacket are both in very good condition. Translated from the French by Deke Dusinberre. Preface by Richard Martin.

It is fitting that the epicenter of men’s fashion is London whereas the women’s in Paris. Like the English, the story of men’s clothing is continual evolution, while women’s charged forward, much like the France, with a series of revolutions and counter-revolutions. Nowhere is that more evident than in this image-filled, hefty monograph that traces the subject from Beau Brummell through the sartorial influence of Hollywood in the thirties and forties to the outrageous fashions of the 1960s when it appeared—just for a moment—that men’s fashion might be embarking upon a revolution of it its own. Includes stops at Savile Row, Oxford and Cambridge, Carnaby Street, and Ralph Lauren. Excellent.

“The year 1925 is a landmark date. Not because the Paris Exposition des Arts Décoratifs took place that year, nor because Mein Kampf was published, Chanel No. 5 invented, Eisenstein’s Battleship Potemkin released. No, for all of those interest in the history of men’s fashion, 1925 is above all the year Oxford bags first appeared.” (p. 15)