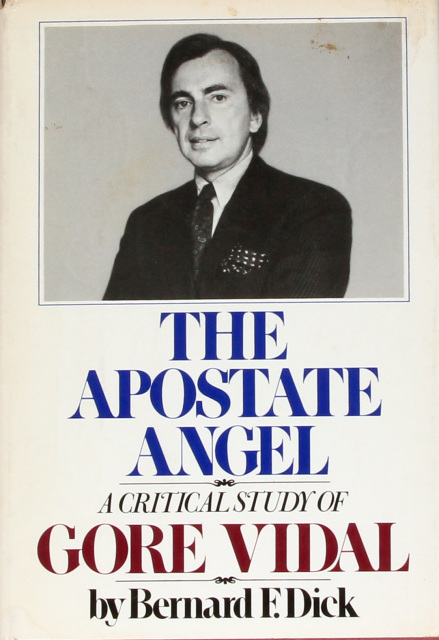 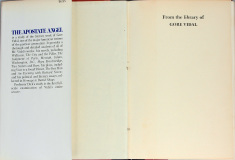 [Ex Libris Gore Vidal] Dick, Bernard F. The Apostate Angel, A Critical Study of Gore Vidal. First Edition. 1974. Book and dust jacket are both in very good condition—jacket shows a few minor dirt spots. Book is stamped “From the library of GORE VIDAL” on the flyleaf.

There is no doubt that Gore Vidal is in the upper echelon of 20th Century American writers. This excellent review of his work through the early seventies makes a convincing case that he should be even nearer the top. He must have placed this copy in his library with pride. The book analyzes not only Vidal’s novels but his work for film, television, and the stage, offering extraordinary insight into details easily overlooked. The gist is that Vidal used his interest in the movies and popular culture not to drag him down but to but to bring his audience up to his level—the apotheosis of which was Myra Breckinridge, which this book dissects in fascinating detail.

“As an adapter, Vidal had the popularizer’s ability to reduce a work to its central theme without disturbing its complexity.”