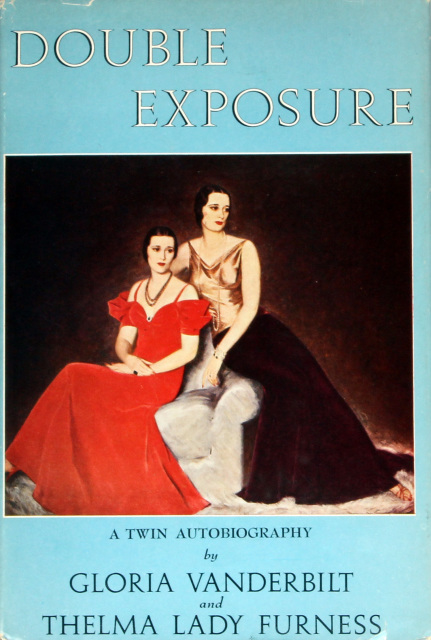 [Ex Libris Truman Capote] Vanderbilt, Gloria and Furness, Lady Thelma. Double Exposure, A Twin Autobiography. Third Printing. 1958. Book is in very good minus condition dust jacket is in good plus condition—endpapers show foxing, and jacket shows a chip and tear to the spine and small edge tears. This copy is from the library of Truman Capote with his ownership initials on the flyleaf. Laid in is a Bonhams slip indicating that this was part of lot 1061 in “The Private World of Truman Capote” sale.

This is the dual autobiography of the Morgan sisters, identical twins who debuted with a splash in 1921 and came to personify the glamour and fast-living of the 1920s. One was at the center at the most famous custody battle of the 20th Century, fighting her sister-in-law Gertrude Vanderbilt Whitney for guardianship of her heiress daughter Gloria (who would grow up to become quite famous herself). The other was the married mistress of King Edward VIII who made the mistake of introducing him to her good friend Wallis Simpson. Truman Capote (to whom this copy belonged) and Gloria Vanderbilt (the younger) were youthful acquaintances and later social ones. They shared a close friend—Carol Matthau. Matthau was one of the few friends to stand by Capote after the publication of “La Côte Basque, 1965,” a fictional story in which both Matthau and Vanderbilt make cameo appearances.

“Every age has its charm and its moment of beauty. And it is of these that we have tried to write, framing their special quality in the events that shaped our lives.”