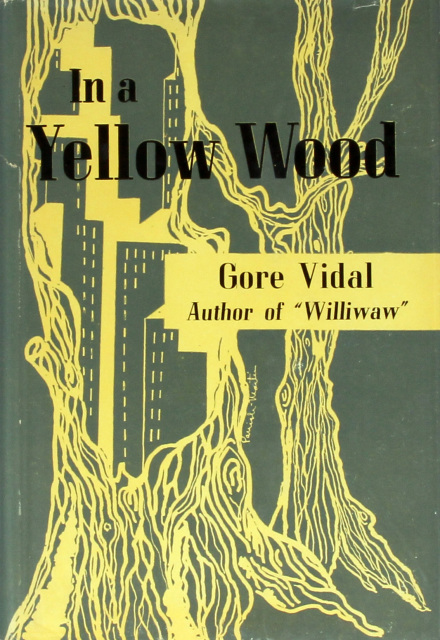 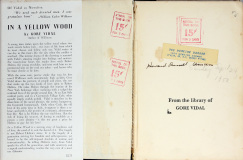 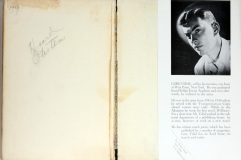 [Ex Libris Gore Vidal; Ownership Signature of Howard Austen] Vidal, Gore. In a Yellow Wood. First Edition. 1947. Book is in fair condition; dust jacket is in very good condition—the book is stamped “Rental Book,” and pages and covers show significant wear. Book is stamped “From the library of GORE VIDAL” on the flyleaf. Gore Vidal’s partner Howard Austen’s ownership signature is on both the front and rear flyleaf. The front flyleaf, is dated “Sunday, Sep 24, 1950,” (twenty days from the Labor Day Monday at the Everard Baths when Vidal and Austen first met).

Gore Vidal intended this novel, his second, to be an examination of the masks people wear, but ultimately it became about the games people play, with a character based upon Vidal’s erstwhile lover Anaïs Nin (to whom he dedicated the book). The date and ownership signature of Howard Austen (then Auster) mean this copy was acquired or given to Austen not long after he and Vidal first met. They were constant companions for over fifty years until Austen died in 2003. Vidal’s memoir Palimpsest portrays a prep school friend who died at Iwo Jima as the love of Vidal’s life, but most friends of the couple say that Austen was indispensable to Gore Vidal and that when he died, so too did Vidal’s best years.

“Every person saw him differently, not entirely because every person was different, but because he had also intended it to be that way.”