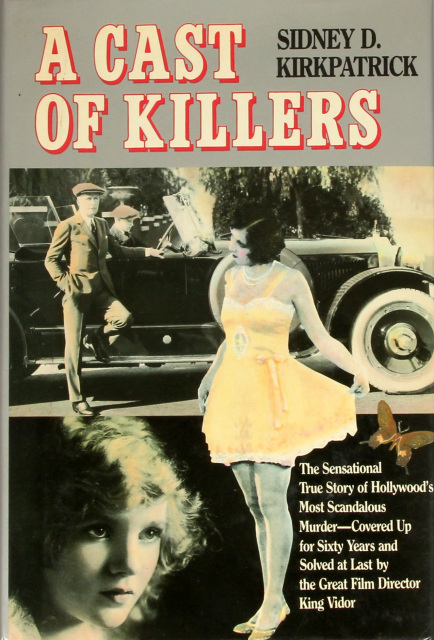 A Cast of Killers, True Story of Hollywood’s Most Scandalous Murder (Humorous Inscription)

[Humorous Inscription] Kirkpatrick, Sidney D. A Cast of Killers, The Sensational True Story of Hollywood’s Most Scandalous Murder. First Edition. 1986. Book and dust jacket are both in very good condition. Book is inscribed on the title page, “Don’t let their story haunt you. It’s only Hollywood. Sidney D. Kirkpatrick.”

It might only be Hollywood, but the murder of silent film director William Desmond Taylor in 1922 was real. It remains a cold case, but the director King Vidor, a contemporary of Taylor’s, sought to solve it forty-five years later and make it into a film. He was so shocked by what he discovered that he shelved both the project and the evidence he had accumulated. His research eventually fell into the hands of the author of this book, who wrote it in the style of the nonfiction novel popularized by Truman Capote’s In Cold Blood. Suspects include Taylor’s drug addled girlfriend Mabel Normand, Normand’s cocaine dealer, Taylor’s homosexual houseman, the adolescent star Mary Miles Minter (a Mary Pickford lookalike who was Taylor’s underage lover), and Minter’s ruthless stage mother.

“Nothing Taylor said or did that day could lead a detective to believe that it would end in violence. Why had the murderer selected that day? Was it motivated by a series of events, a sudden decision, or a bit of information that has somehow been overlooked?”