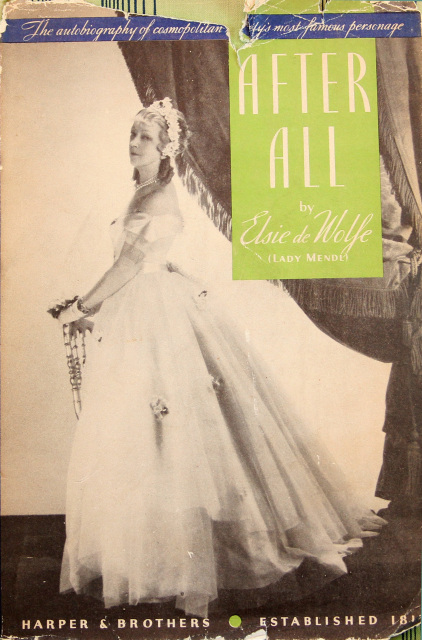 After All by Elsie de Wolfe (Original Jacket plus Facsimile)

Wolfe, Elsie de. After All. Third Edition. 1935. Book is in very condition; dust jacket is in poor condition, but it is enclosed by a facsimile jacket in near fine condition.

This autobiography of the famous American decorator is no tell-all. If it were, it would violate all that Elsie de Wolfe stood for. Her personal motto was “never complain, never explain.” Thus, one will not learn the specifics of her relationship with Elisabeth Marbury (such a puzzle). De Wolfe was an intriguing mixture of discretion and outlandishness. Though known for her lavish decoration and entertaining, her personal habits bordered on the ascetic. The rosebud of her story is the awkward adolescence that led to Elsie’s lifelong passion for all that is beautiful, which she relates with candor and élan in this engrossing autobiography.

“Do not mistake eccentricity for chic. They have not even a bowing acquaintance.”