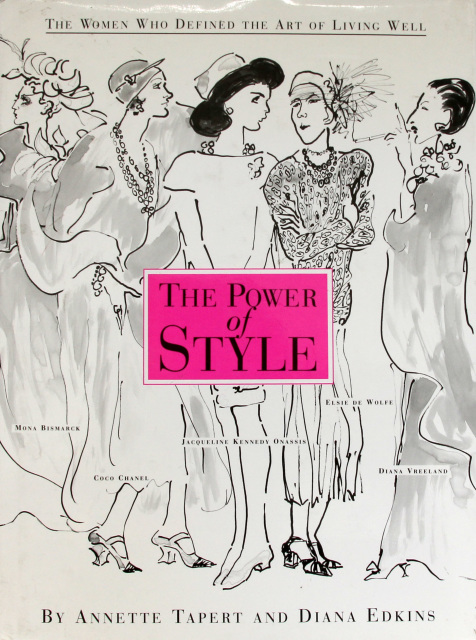 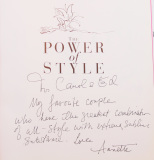 The Power of Style Signed to Ed Victor

[Signed to Literary Agent Ed Victor] Tapert, Annette. The Power of Style. First Edition. 1994. Book and dust jacket are both in very good condition. This copy is inscribed, “For Carol & Ed, My favorite couple who have the greatest combination of all—style with extreme, sublime substance.” Co-written with Diana Edkins.

This mid-nineties book was a big success. It broke through the popular culture barrier, introducing the great 20th Century tastemakers to a younger and appreciative audience. It features heiresses like Daisy Fellowes and Millicent Rogers but more typical are the women whose beauty and style practically demanded that they marry into great fortunes—such as Babe Paley, Gloria Guinness, Jacqueline Kennedy Onassis, and Pauline de Rothschild. Rounding out the group are those whose energy and creativity paid their own way—Diana Vreeland, Coco Chanel, and Elsie de Wolfe. The book’s size is that sweet spot between a reading book and a monograph, and it is filled with portraiture and photographic illustration alongside the text.

“Style, we suspect, is a subject with endless allure precisely because it can’t be neatly defined. In its mystery lies its power.”