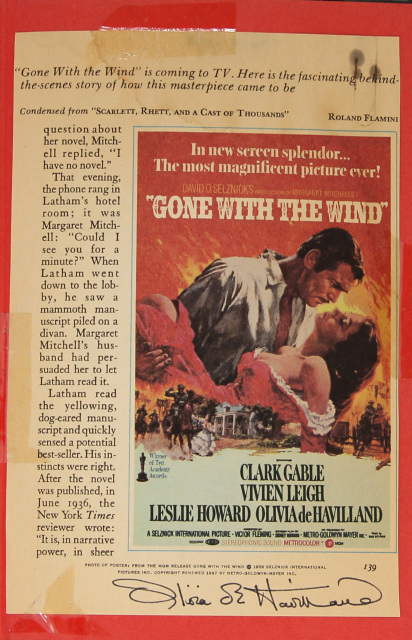 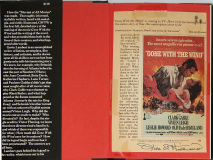 GWTW, The Making of Gone with the Wind, Signed by Olivia de Havilland

[Signed by Olivia de Havilland] Lambert, Gavin. GWTW, The Making of Gone with the Wind. Fourth Printing. 1973. Book and dust jacket are both in very good condition—jacket shows minor edge tears and very light fraying. Book is signed “Olivia de Havilland” on a magazine advertisement promoting the film, which has been tipped into the flyleaf of this copy.

The production of Gone with the Wind was as epic as the film was itself, and it had many of the problems that frequently torpedo the appeal of Hollywood films—multiple and last-minute re-workings of the script, the firing of the original director George Cukor, the illness and fatigue of replacement director Victor Fleming, and the challenge of trimming material from the beloved, thousand-page book from which the film was adapted. Yet, it was Hollywood’s greatest success. Hollywood insider Gavin Lambert explains why in this intelligent and succinct book that travels from Margaret Mitchell's conception of the book to the post-GWTW fate of its principal cast and crew (spoiler alert: Olivia de Havilland, GWTW’s Melanie, is still living).

“The tradition of Hollywood film-making in the thirties was that you could you make everything look better by building a set, and the kind of vast, nostalgic, quintessential evocation of the South that Selznick wanted could only be achieved at the studio.”