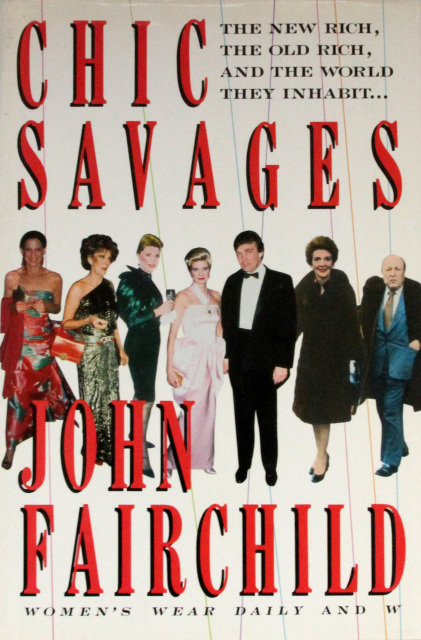 [Signed] Fairchild, John. The Chic Savages. First Edition. 1989.Book and dust jacket are both in very good condition. This copy is inscribed by Fairchild on the flyleaf, “Dear Craig, Merry Christmas to the chicest savage I know.”

No one has yet written the definitive book on 1980s Nouvelle Society, whose hub was in New York but whose fiefdoms (reachable via private jet) included Hollywood, Paris, London, and Washington D.C. Until that definitive book is published, this exposé is among the best at portraying the outrageous Nouvelle Society ecosystem that was ruled by fashion, ready cash, philanthropy, and voracious pursuit of publicity. Fairchild, publisher of W and WWD, was as familiar with cast of characters as well as he did the designer brands that the wore. Includes insider stories on the stars of that era—Brooke Astor, Susan Gutfreund, Calvin Klein, Bill Blass, Oscar de la Renta, Lily Safra, et al.

“Style is an expression of individualism mixed with charisma. Fashion is something that comes after style.”