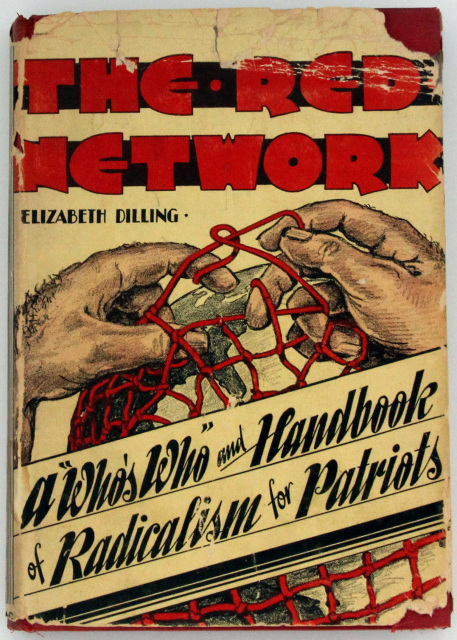 Dilling, Elizabeth. The Red Network, A “Who’s Who” and Handbook of Radicalism for Patriots. First Edition, Fourth Printing. 1935. Book is in good condition; dust jacket is in good minus condition—jacket shows creasing and chips to the upper right and left front cover, but it remains bright and attractive.

Fear and mass hysteria are golden opportunities to bring people together—all that is required is someone to stir the pot who happens to be without lacking moral principle. Enter this author, Elizabeth Dilling, from stage right. She never considered that a system as toxic as Communism would eventually cause its own demise. In this book, she condemns Mahatma Gandhi’s nonviolent demonstrations as “Moscow-financed agitations” and warns that under Socialism, women expect equal rights to men. She views even the Methodist Church with suspicion. The Social Register-like appendix lists the Red credentials of Albert Einstein, Eleanor Roosevelt, Upton Sinclair, and others whom history views far more favorably than does this scurrilous book.

“One of the best press-agented men in the world is Albert Einstein, who dares to tell the smart professors that his Relativity theory is so far beyond their intelligence that they cannot understand it—and gets away with it.”