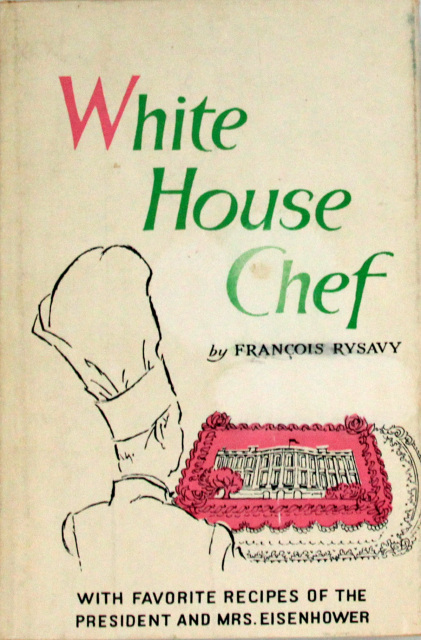 Rysavy, François. White House Chef, with Favorite Recipes of the President and Mrs. Eisenhower. First Edition. 1957. Co-written with Frances Spatz Leighton. It is a myth that the Kennedys were the first to bring French cooking to the White House. Chester Arthur was an aficionado. Also, the Eisenhowers hired a French-trained chef François Rysavy—a native of Czechoslovakia who first landed in Hollywood and whose previous employers included Louis B. Mayer and Sam Goldwyn prior to taking a job with Dwight and Mamie Eisenhower in the White House. In this delightful book, he mixes memoir with recipes and entertaining suggestions, including favorites of the Eisenhowers and that dates all of the way back to the reign of Martha Washington.

“Early in June, 1957, when the papers recorded that President Eisenhower had eaten too much blueberry pie, the stomach pain he suffered had caused a ‘sympathy pain’ on Wall Street that sent the stock market dashing down millions of dollars.”