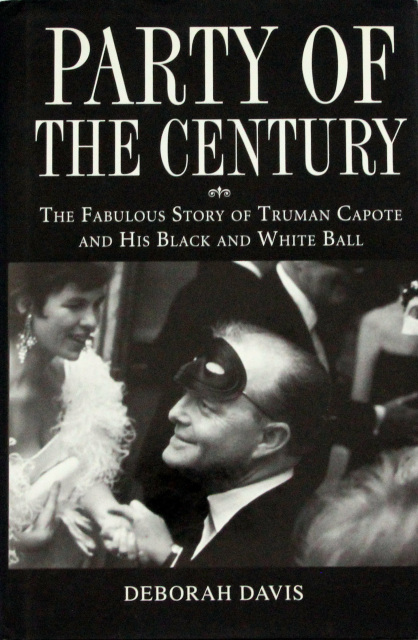 Party of the Century, Signed to Kenneth Jay Lane

[Signed to Kenneth Jay Lane] Davis, Deborah. Party of the Century. First Edition. 2006. Book and dust jacket are both in very good condition. Book is inscribed, “For ‘The Most Import Man in a Fashionable Woman’s Life’ — I had so much fun writing about you! Best wishes, Deborah Davis.”

Leo Lerman joked that the guest list for Truman Capote’s famed Black and White Ball resembled “an international list for the guillotine.” Alas, the executioner’s blade was out, but not for the guests (except for perhaps the host). Its target was the brittle neck of the 20th Century itself. The party was in 1966, the pivot point between the relatively calm early years of the decade and the turbulent ones that followed, in which society changed forever. Never again would country club members take precedence over the movers and shakers of international society. This captivating book covers all aspects of the party—its host, its glittering guest list, its huge press, and its aftermath (Capote did not realize then, but his life had reached its apogee and would soon take a precipitous decline—within a decade, many on his guest list would no longer be speaking to him).The inscription in this copy belonging to Kenneth Jay Lane quotes from a description of him on page 186 of the book (one of several mentions of him, including an appreciation in the acknowledgements).

“Traditionally, Hollywood, Washington, and New York rarely intersected. Capote’s party changed all that, and not just for one night.”