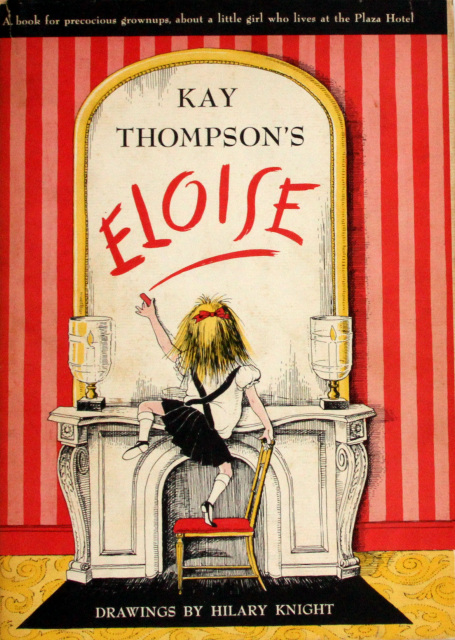 [Signed] Thompson, Kay. Kay Thompson’s Eloise. Twelfth Printing. 1955. Book and dust jacket are both in very good minus condition. Book is inscribed on the flyleaf, “For John for Lord’s sake, Kay Thompson.” Thompson has also signed it “me Eloise” on that same page. Illustrated by Hilary Knight.

Kay Thompson was a childhood friend of Tennessee Williams. She was Louis B. Mayer’s top music arranger at MGM Studios. She portrayed the “Think Pink” Diana Vreeland character in Funny Face. She was vocal coach to Frank Sinatra, Lena Horne, and Judy Garland. Yet, Thompson will forever be remembered for her six-year-old alter ego, Eloise. One of iconic characters of the conformist 1950s, Eloise was more subversive than we recall (though never subpoenaed to appear before Senator Joseph McCarthy’s House on un-American Activities committee). A delightful book, and that rare instance when the text and the illustration are in perfect accord—both are sublime.

"Back in the '50s, this was you know the Leave it to Beaver, milk and cookies very sweet sort of family values. Kaye's creation of the Eloise character, this was a little girl without parental supervision; she was incredibly rebellious and had an imagination. She very purposefully gave this young girl an independent mind."