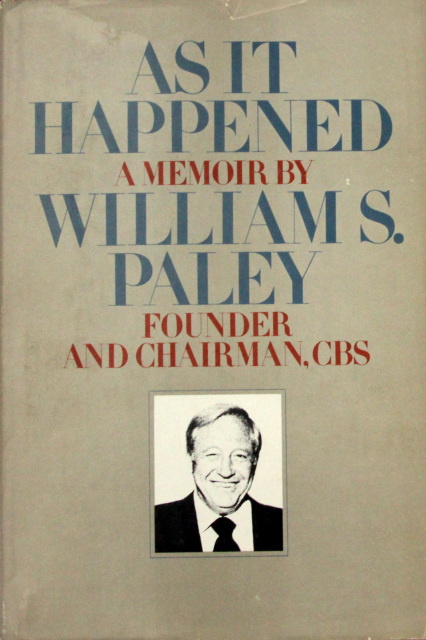 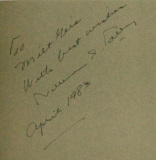 As It Happened, Signed by William S. Paley

[Signed] Paley, William S. As It Happened. First Edition. 1979. Book is in very good condition; dust jacket is in very good minus condition—jacket spine shows fraying.It is inscribed on the blank page preceding the title page, “To Milt Geis, with best wishes, William S. Paley, April 1983.” Laid in is a CBS company magazine, with a question-and-answer interview with Paley.

William S. Paley was one of the 20th Century’s great visionaries. Recognizing the potential of advertisement-supported broadcast potential early on, he transformed a small network of radio stations into a media juggernaut that eventually included CBS Television, Columbia Record Company, and a Broadway production company whose hits included My Fair Lady and Camelot. He was no less discerning in his personal life. His wife Barbara “Babe” Cushing Paley was one of the great beauties and most admired tastemakers of the mid-20th Century. They were the rare example of a successful marriage in which each permitted the other to shine with equal brilliance. And, together, their wattage was off the charts (it turns out that one-plus-one sometimes equals three). Much of what came to pass is now enshrined in legend, as if pre-ordained, but then, as it was happening, it required laser-like instinct and an eye always towards the future. Such talents are difficult to translate the page, but Paley gives it his best shot in this memoir, written not long after the death of his wife, Babe.

“A large part of virtue consists in good habits.”