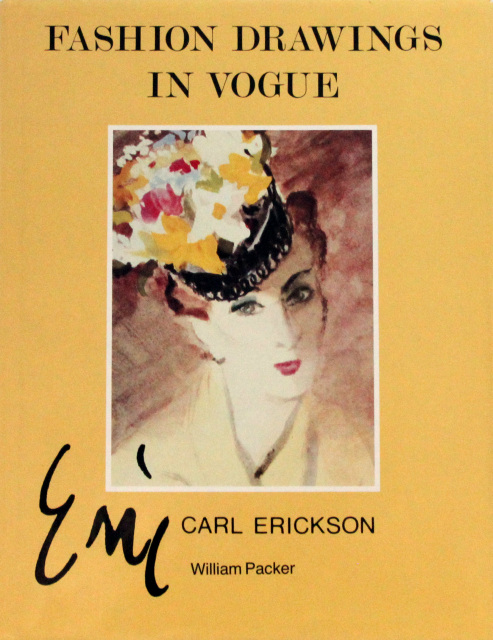 Fashion illustration is the art of addition through the act of subtraction. By distilling an image to its essence, illustration enhances an idea, a mood, or a mode of living. Moreover, the subject is not limited to its stated boundaries. Like the fashion magazines themselves, fashion illustration includes society, celebrity, and lifestyle portraiture. Carl “Eric” Erickson, who illustrated for Vogue from 1918 to his death in 1958, was one of the most-admired in his profession. As photography became illustration’s competitor (and eventual conqueror), Eric’s drawings conveyed a mood and feeling that made photo journalism seem lifeless in comparison. This slender monograph includes his Vogue covers, portraits of luminaries such as Marlene Dietrich and Alice B. Toklas, and, of course, his fashion work (with his interpretation of dresses by Chanel, Schiaparelli, Dior, etc.)

“[Eric] was an essentially simple man who drew what he saw, neither more nor less. So much so that, if asked to draw a model in a dress that didn’t fit her, he drew a model in an ill-fitting dress.”