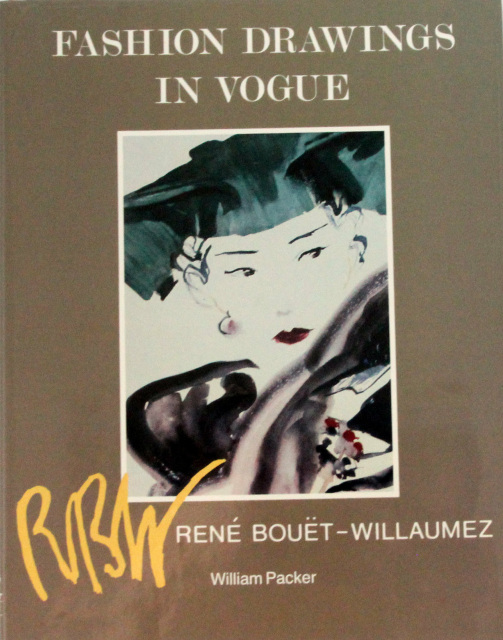 René Bouët-Willaumez illustrated for Vogue roughly the same years as Carl “Eric” Erickson—the 1920s through the 1950s. There is similarity in style, but one means of distinguishing them is to spot the influence of French illustrators (most prominently, Marcel Vertès) in the work of Bouët-Willaumez. Prior to World War II, Eric and Bouët-Willaumez were both based out of Paris, but Eric was a native of the American Midwest; whereas, Bouët-Willaumez was a minor member of the nobility. Irrespective of birth, they were on the same elevated playing field at Vogue. This volume is identical in size and scope to the slender monograph on Eric that Packer completed that same year. It includes Vogue covers, dresses by Schiaparelli, Chanel, etc., and portraits of society at play. So chic.

“As Eric became established, a French artist, René Bouët-Willaumez, also began [to work] for Vogue in Paris. He happened to have a style very similar to Eric’s, which irritated Eric’s competitive wife so much that Willaumez had to be removed to England for a while.”