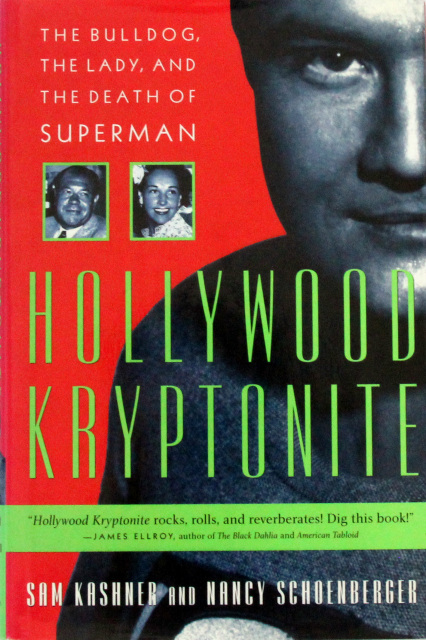 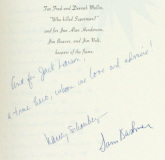 [Signed Presentation to Jack Larson] Kashner, Sam. Hollywood Kryptonite, The Bulldog, the Lady, and the Death of Superman. First Edition. 1996. Co-written by Nancy Schoenberger. It is inscribed on the dedication page, “And for Jack Larson, a true hero, whom we love and admire, Nancy Schoenberger.” It is also signed by Sam Kashner on that same page. Laid in is a handwritten note, “Dear Jack—here it is—our most controversial book! Sorry we’ve been out of touch, but it’s been a hellacious past six months—teaching, this book, getting into a serious car crash, etc., etc. We’re fine now, but are worried that you & others won’t like this book. We hope, at least, that our affection & respect for you comes through these pages (and we think it does). Fondly, Sam & Nancy.”

The suspicious death of George Reeves, famous for his portrayal of Superman in a 1950s television series, might not be the most well-known Hollywood scandal, but it is maybe the most fascinating. It has all the elements of film noir—a corrupt police department, a jilted lover hellbent on revenge, a powerful film studio boss with the ability to control the police and squelch the media, and a private detective who must decide whether to back off the case or risk his own suspicious death. Jack Larson, to whom this copy is signed, played Jimmy Olsen to Reeves’s Superman. They were friends, and Larson appears multiple times in the book. Larsen was also friends with the jilted lover, Toni Mannix, wife of Eddie Mannix, who was known to practice the black arts in his role as lieutenant to Louis B. Mayer at era’s most powerful movie studio, MGM. It is Larson’s loyalty to Toni Mannix that cause the books’ authors to think he might not be so pleased with the book’s conclusions (and they were correct; he wasn't).

“It was Jack Larson who offered a full, intimate picture of who George Reeves was during the making of The Adventures of Superman. Larson’s grasp of the ironic moment and his poet’s eye for detail helped us flesh out a ghost.”