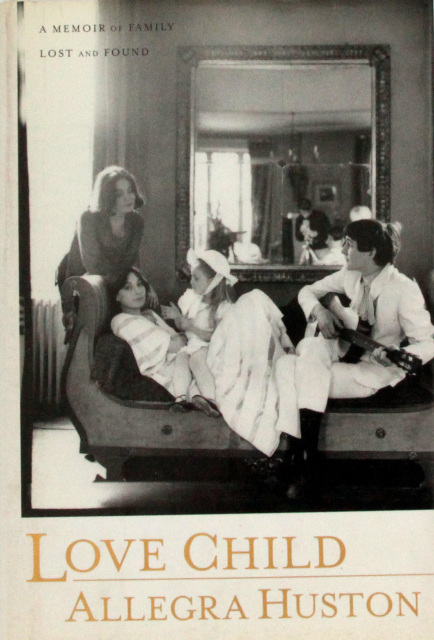 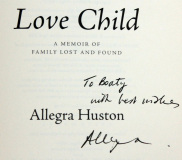 [Signed, Ex Libris Kenneth Jay Lane] Huston, Allegra. Love Child: A Memoir of Family Lost and Found. First Edition. 2009. Book and dust jacket are both in very good minus condition—pages show low light browning with age, as does the white dust jacket cover. This book is from the library of Kenneth Jay Lane, but it is not signed to him. It is inscribed, “To Boaty [Boatwright?], with best wishes, Allegra.”

To capsulize this memoir is to unfairly trivialize it—it turns the author’s poignant story into tabloid fodder. The players are nearly all bold-face names—among the most talented and well-known people of the 20th Century. Allegra Huston was the daughter of model and ballerina Ricki Soma via her affair with John Julius Norwich, the son of Duff and Diana Cooper. Ricki was married to (but estranged from) her husband John Huston, one of Hollywood’s great film directors. Only when Ricki tragically dies is Allegra, at age four, introduced to her ostensible father—John Huston—and it is another eight years before she learns of and meets her biological father. Added into this mix is her glamorous older sister Anjelica, then dating Jack Nicholson (whom Allegra admired) and then Ryan O’Neal (whom she did didn’t). This copy somehow found its way into Kenneth Jay Lane's library, but most likely first belonged to Boaty Boatwright, who onceworked as a casting director for John Huston.

“The journalist wrote that [my step-mother] Cici lived with her husband, the film director John Huston … and John’s adopted daughter Allegra. I read the words over and over, wondering if the journalist could have confused the fact that I wasn’t Cici’s real daughter without my not being Dad’s.”