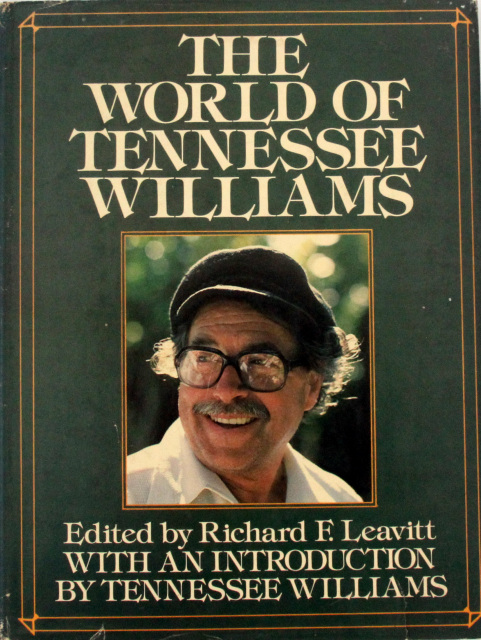 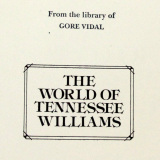 [Ex Libris Gore Vidal] Leavitt, Richard E. (ed.). The World of Tennessee Williams. First Edition. 1978. Book is in very good condition; dust jacket is in very good minus condition—jacket has minor tears that have been archivally repaired, and jacket spine shows fraying. Book is stamped “From the library of GORE VIDAL” on the flyleaf. Introduction by Tennessee Williams.

Assembled scrapbook-style, this book gives equal measure to the professional and personal life of the great 20th Century American playwright. There are over two hundred illustrations, which are distributed chronologically, from William’s adolescent years in St. Louis through his golden age, and into his later years in which a comeback eluded him. Gore Vidal, to whom this copy belonged, was a friend of Williams’s—he called him by a nickname, “Bird.” Vidal appears in the book—the index lists him on four pages.

“When Gore Vidal told [Tennessee] Williams that he didn’t miss a thing by sleeping through the decade of the sixties, he also said, ‘If you missed the sixties, Bird, God knows what you are going to do with the seventies.’”