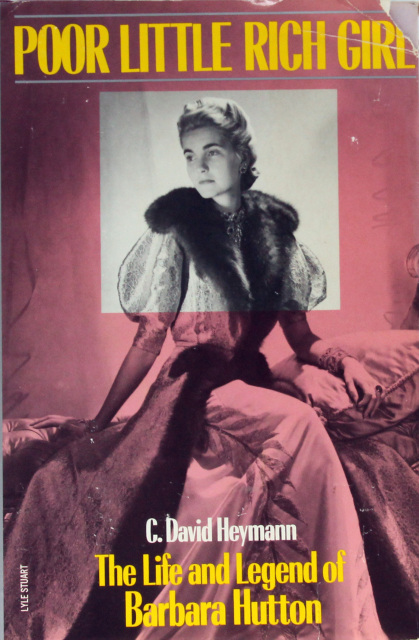 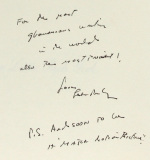 [Third Party Inscription to Aileen “Suzy” Mehle] Heymann, C. David. Poor Little Rich Girl, The Life and Legend of Barbara Hutton. Second Edition. 1984. Book is in very good condition; dust jacket is in good plus condition—there is a chip to the upper right front cover of the jacket. On the flyleaf, a third party has inscribed, “For the most glamorous writer in the world, also the most motivated! Love [Indecipherable]. P.S. And soon to in “[Indecipherable] Life in Pictures.”

The identity of the party who inscribed this book to the gossip columnist known as Suzy remains a mystery, but he or she perfectly captured the essence of Aileen Mehle. With looks that dazzled (she could have easily become movie queen), Mehle was indeed the world’s most glamorous gossip columnist, equally comfortable at a glamorous international ball hosted by the Baron de Redé as she was clacking away on a typewriter. At times, such as the two years when she dated Frank Sinatra, she could just as easily have been part of the story as write about it. The history behind this particular title is rather extraordinary. It was originally published by Random House. When factual errors were discovered, Random House pulped over sixty thousand copies. After Heymann corrected the errors, it was picked up by Lyle Stuart, a renegade publishing house, for a pittance and went on to become a runaway bestseller and the basis for a Barbara Hutton biopic starring Farrah Fawcett in the title role.

“I've never seen a Brink's truck follow a hearse to the cemetery.”