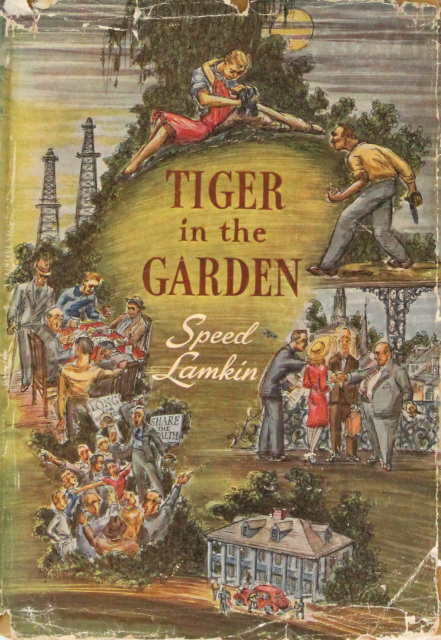 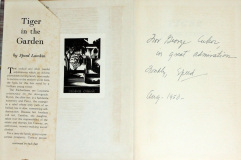 Tiger in the Garden, Signed by Speed Lamkin to George Cukor

[Signed to George Cukor] Lamkin, Speed. Tiger in the Garden. First Edition. 1950. Book is in very good condition; dust jacket is in good plus condition—endpapers show mild discoloration, and dust jacket shows edge tears, minor chipping, and creasing, and it is price clipped. Book is inscribed on the flyleaf, “For George Cukor, in great admiration, Fondly, Speed. Aug. 1950.” George Cukor’s famous Paul Landacre-designed bookplate is attached to the front endpaper.

This Southern Gothic potboiler touching upon homosexual themes was written by the devastatingly handsome Speed Lamkin when he was only twenty-two. It was released two years after Truman Capote’s Other Voices, Other Rooms, and though very different books, the two were occasionally compared because both were written by gay Southern authors. After Tiger in the Garden’s release, Lamkin relocated from New York to Los Angeles to conduct research for his next novel, The Easter Egg Hunt. He became a leading member of a gay-friendly bohemian circle that included Christopher Isherwood (who credits Lamkin with fixing his novel The World in the Evening) and film director George Cukor, to whom this copy belonged.

“I should have gone to New York or to New Orleans where you can really live, maybe even to Paris with that friend of mine from college; and never come back to this heat and poor old part of the country that fools you into thinking it’s civilized and romantic, just because it’s tired and rundown.”