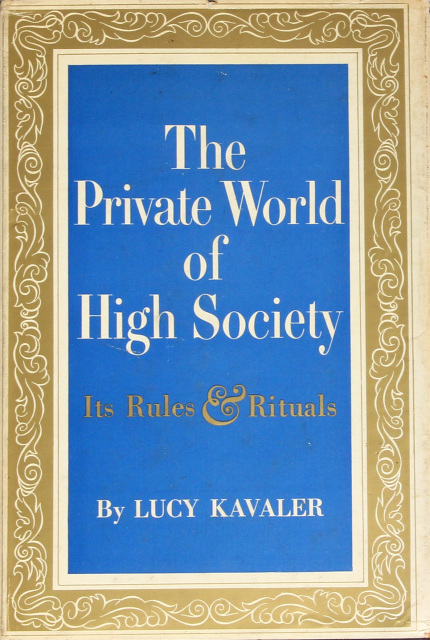 The Private World of High Society, Its Rule & Rituals

Kavaler, Lucy. The Private World of High Society, Its Rule & Rituals. First Edition. 1960. Book and dust jacket are both in very good condition.

This well-written book never takes itself or its subject too seriously. Case in point, Kavaler admits as a young girl, she believed the Social Register “was an exclusive listing of dogs.” For her research, she traveled the country from New York to San Francisco, visiting private clubs, charity circuits, and private schools (but no kennels). She makes many interesting points. In one that was particularly prescient, she wonders if society were becoming so accessible that it would soon become fashionable to be out of society. In the late 1960s, that came to pass. Uncommon in dust jacket.

“If a friend says she’ll meet you at the Colony for lunch, it’s inexcusable to ask if it’s the club or the restaurant. You’re supposed to know.”