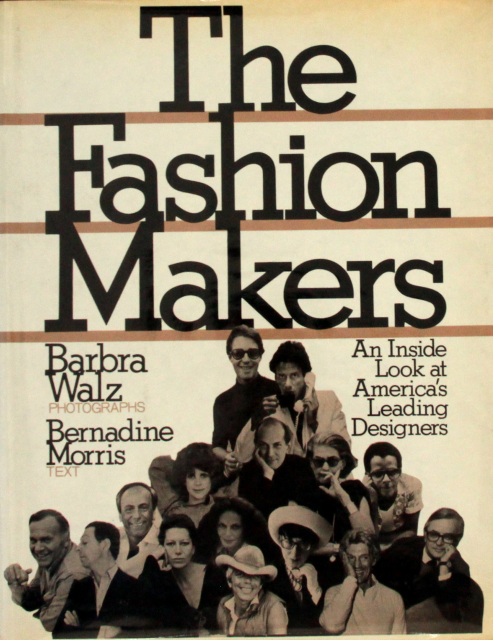 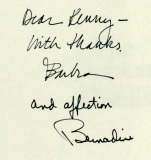 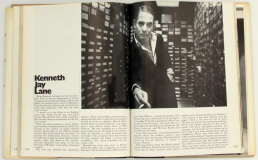 [Signed to Kenneth Jay Lane] Morris. Bernadine. The Fashion Makers. First Edition. 1978. Book and dust jacket are both in very good minus condition. Photographs by Barbra Walz. This book is from the library of Kenneth Jay Lane, who is profiled in the book. It is inscribed to him by both author and photographer, “Dear Kenny—with thanks, Barbra, and affection Bernadine.”

The decade of the 1970s was a watershed for American fashion. Until then, European designers were the marquee names. Lower down the food chain, Seventh Avenue designers knocked off French designs. It was not until the mid-1970s when designers like Halston, Bill Blass, Calvin Klein, Oscar de la Renta, and Ralph Lauren emerged that New York City began to rival Paris and Milan. This book was one of the first to recognize the new order. It profiles fifty of the leading U.S.-based designers from that era, including Kenneth Jay Lane (to whom this copy belonged) and also Adolfo, Geoffrey Beene, Perry Ellis, James Galanos, Edith Head, Stan Herman, Charles James, Betsey Johnson, Donna Karan, Ralph Lauren, Mary McFadden, Elsa Peretti, Arnold Scaasi, Adele Simpson, Pauline Trigère, and Diane von Furstenberg.

“It became the fashionable thing for visitors from Europe to pick up a piece of Kenny Lane jewelry when they were in this country. Princess Margaret had some, so did the Duchess of Windsor. I was lucky. It became a craze.”