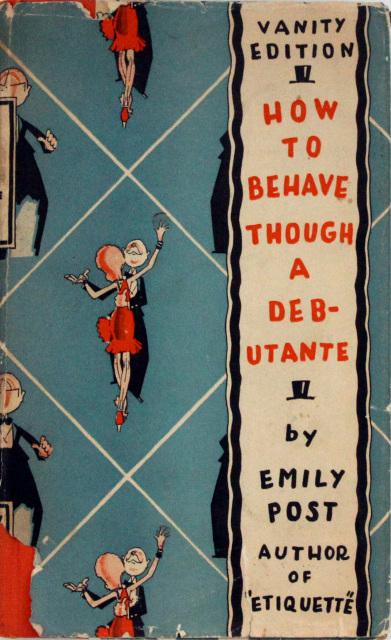 Post, Emily. How to Behave—Though a Debutante. First Edition. 1928. Book is in very good condition; dust jacket is in good plus condition—jacket shows a 1 3/4-inch chip to the lower spine, which in Mylar, is disguised by a facsimile underlay (see photos). Illustrated by John Held, Jr.

The foremost arbiter of manners, Emily Post, first published this book in serial form in Vanity Fair under the anonymous pen name Muriel. A satire on the unseemly behavior of the flapper generation, its intentional vulgarity was mistaken for truth. The release of the story in book form revealed Muriel’s true identity. Borrowing from both Anita Loos’s Gentlemen Prefer Blondes and her own Etiquette: The Blue Book of Social Usage, Post (as Muriel) belittles many of her own rules with a wink and a nod. The jacket, in any condition, is uncommon. This copy, aside from the chip, is in exceptional condition.

“As lots of people think a debutante leads a butterfly life, it would probably be as well to describe an average day. To begin with, you wake up quite early—about nine o’clock.”