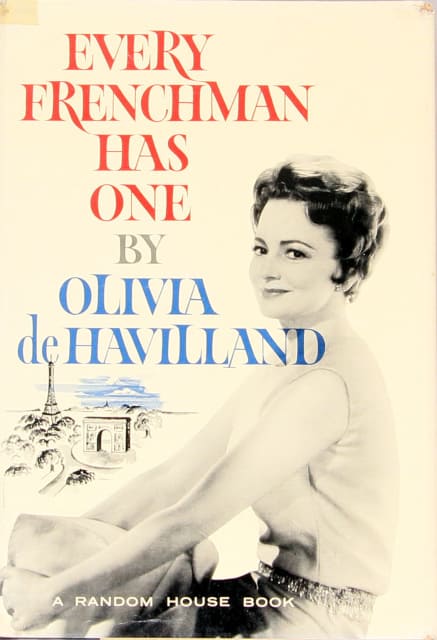 Every Frenchman Has One, Signed by Olivia de Havilland

Havilland, Olivia de. Every Frenchman Has One. First Edition. 1962. Book is in very good condition; dust jacket is in very good minus condition—jacket shows a taped repair to the spine. The book is inscribed by Olivia de Havilland on the page preceding the half title page.

Film legend Olivia de Havilland said of the Hollywood rat race, “Famous people feel that they must perpetually be on the crest of the wave, not realizing that it is against all the rules of life. You can’t be on top all the time, it isn’t natural.” What better way to remove oneself from the wave than to retire to Paris, (which she did in the 1950s by marrying the editor of Paris Match Pierre Galante)? This book, written after she had spent half a decade in the city was the closest de Havilland ever got to writing an autobiography or a memoir. In it, she compares and contrasts Paris and Hollywood. Neither city goes unscathed, but it is light and breezy and all in good fun.

​“In France, it’s assumed that if you’re a woman you are sexy, and you don’t have to put a dress on to prove it.”