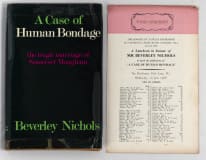 A Case of Human Bondage, Signed by Beverley Nichols

[SYRIE MAUGHAM] [Signed] Nichols, Beverley. A Case of Human Bondage, The Tragic Marriage of Somerset Maugham. First Edition. 1966. Book is in very good condition; dust jacket is in good minus condition. Book is signed by Nichols. Laid in is the program for a luncheon at the Dorchester launching the book. It includes a list of attendees (Oliver Messel, Fleur Cowles, et al.)

Perhaps society decorator Syrie Maugham preferred her marriage as blanc as the all-white rooms for which she was known. On the other hand, maybe she simply wanted to preserve her dignity. Her husband would have none of it, and in a humiliating weekend at their country home, he decisively ended their marriage. Infuriated by Somerset Maugham’s one-sided account of the breakup following Syrie’s death, Nichols, who was there that weekend and was friends with both parties, seeks to set the record straight in this book.