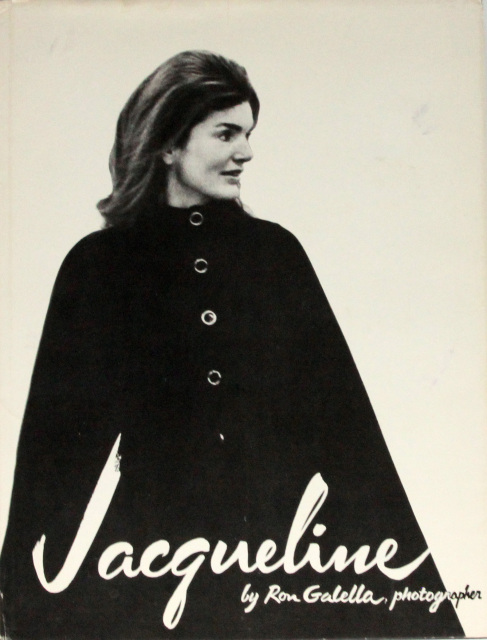 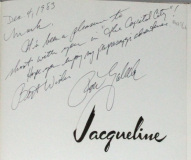 [Signed] Galella, Ron. Jacqueline. First Edition. 1974. Book and dust jacket are both in very good condition. Book is warmly inscribed by Galella to a fellow paparazzo on the half title page, “Dec. 4, 1983, Mark, It’s been a pleasure to shoot with you in ‘the Capitol City’! Hope you enjoy my paparazzi adventure. Best wishes, Ron Galella.”

Ron Galella’s “Windswept Jackie” is the paparazzo equivalent of Leonardo da Vinci’s Mona Lisa. It captures so perfectly the former first lady at a particular time and place in her life. It is but one of many photographs of Jacqueline Kennedy Onassis in this book, but definitely the most important—how strange it is not on the cover (surely there is a story there). Mrs. Onassis was Galella’s muse and goddess. He adored her. It was unreciprocated. She found him to be an unbearable nuisance. Time has softened her injury. The iconic images from her jet set years (cruising the Mediterranean, attending the opera, shopping on Capri) enhance rather than diminish her allure. Galella became notorious when a judge ordered him to remain fifty yards away from Mrs. Onassis at all times. Thirty years later, his famous images of Onassis require appearances at the Paul Kasmin Gallery, not court.

“I don’t take ugly pictures of Jackie. If I have an unattractive picture of Jackie I tear it up. She’s too beautiful to permit the camera to play tricks on her.”