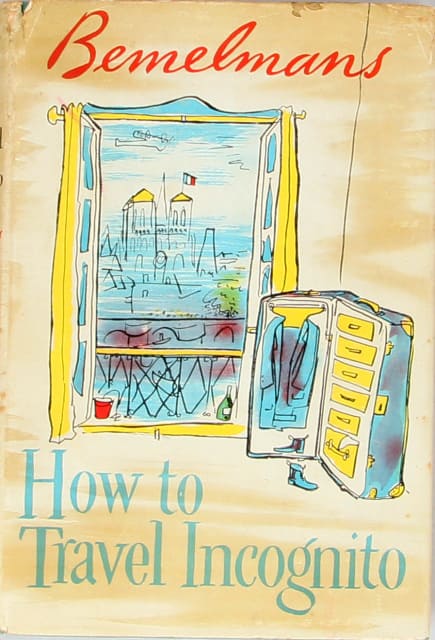 Ludwig Bemelmans, How to Travel Incognito

Bemelmans, Ludwig. How to Travel Incognito. First English Edition. 1952. Book and dust jacket are both in good plus condition—pages show minor foxing, and jacket shows fraying, light chipping, and mild soiling. Includes frequent b & w illustration by the author.

Were this book released today, Bemelmans might be forced into a public apology, because this allegedly factual travelogue is enhanced with generous amounts of romantic fantasy. The plot is thus. A poverty-stricken French nobleman convinces Bemelmans to adopt the title of a forgotten German prince, and the pair travel from Paris to the Riviera, trading in on the grandeur of their fading nobility. Along the way, they encounter maharajahs, American tourists, and other such characters one used to read about in an Elsa Maxwell column.

"What a curious world we live in, or rather float in. I say float, because no one, not anyone, has solid ground to stand on anymore, not even in America."