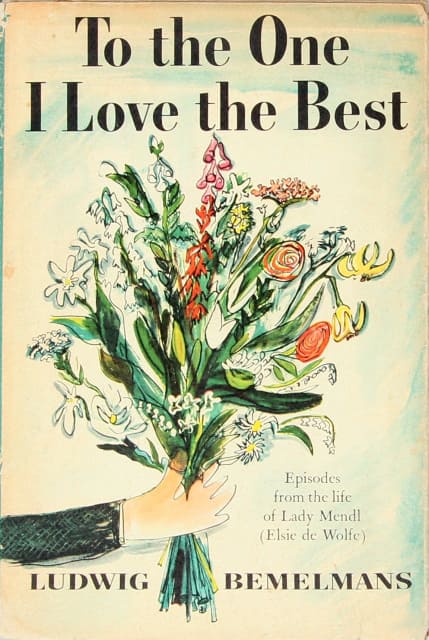 To the One I Love Best, Episodes from the Life of Lady Mendl

SKU:
$125.00
$125.00
Unavailable
per item
Bemelmans, Ludwig. To the One I Love Best, Episodes from the Life of Lady Mendl (Elsie de Wolfe). First Edition. 1955. Book is in very good condition; dust jacket is in very good minus condition—jacket shows chipping to the spine ends.
In this affectionate memoir, Bemelmans recalls his impressionable years, as an acolyte of Elsie de Wolfe during her Beverly Hills exile (she fled her beloved Villa Trianon during the Nazi occupation of France). Filled with a succession of bon mots from the world famous decorator, this book recounts her Los Angeles adventures, including how even at the advanced age of eighty (or perhaps ninety, Elsie never told anyone her true age), she conquered Hollywood. In the last few years, supplies of this book have dwindled. It is now officially uncommon.

"Her will to live happily, or at least beautifully, was so formidable that it triumphed over nature itself."
--Ludwig Bemelmans
1 available
Add to Cart