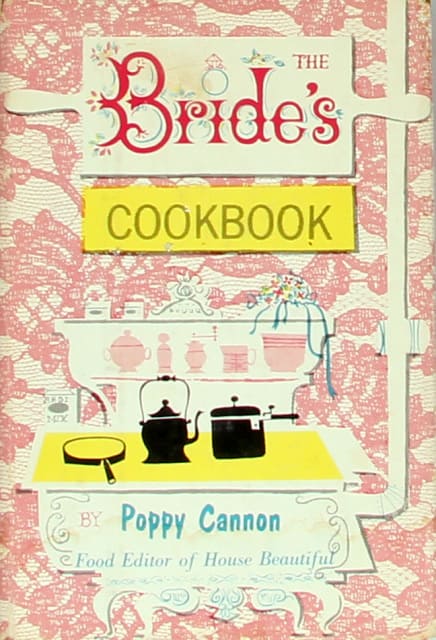 Cannon, Poppy. The Bride’s Cookbook. First Edition. 1954. Book and dust jacket are both in very good condition—endpapers show mild discoloration, and jacket is price-clipped and shows light staining in a few spots.

Poppy Cannon was the bombastic food editor for House Beautiful who became a powerful shill for the burgeoning processed food industry. Here, she assures brides that nourishing meals could be prepared in minutes with the assistance of can openers and prepackaged mixes. Consider her a champion of the unnatural foods movement. Hilariously, her culinary qualifications are now in doubt. A former secretary has since disclosed that Cannon lived on takeout and did not even have her oven and stove connected. Yet, this folly somehow only adds to the appeal of the book—a most amusing gift for the bride of today. Copies in dust jacket are uncommon.

“It is assumed in a cookbook for Brides that we are dealing with two active, healthy young people, one of them a husky male who would be outraged by average or tearoom portions.”