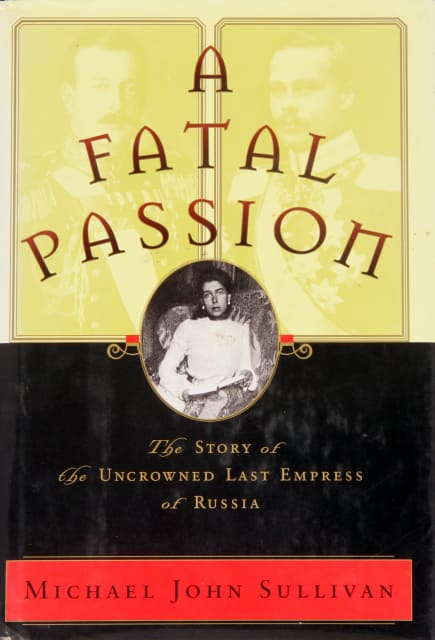 A Fatal Passion, The Story of the Uncrowned Last Empress of Russia

Sullivan, Michael John. A Fatal Passion, The Story of the Uncrowned Last Empress of Russia. First Edition. 1997. Book and dust jacket are both in very good condition.

This engrossing, gossip-filled biography is both history and high romance. The heroine is Queen Victoria’s granddaughter who reluctantly married her first cousin Ernst Ludwig of Hesse and divorced him when she found him with one of the male stable hands. Her second marriage to a grand duke of Russia was a love match but ran afoul of both Russian Orthodox law and an even more formidable obstacle, Czarina Alexandra (sister of Ernest Ludwig). Exile followed. Then they were welcomed back into the fold at the worst possible time—the onset of the Russian Revolution, which nearly cost them their lives.

“I arranged that marriage. I will never try and marry anyone again.”