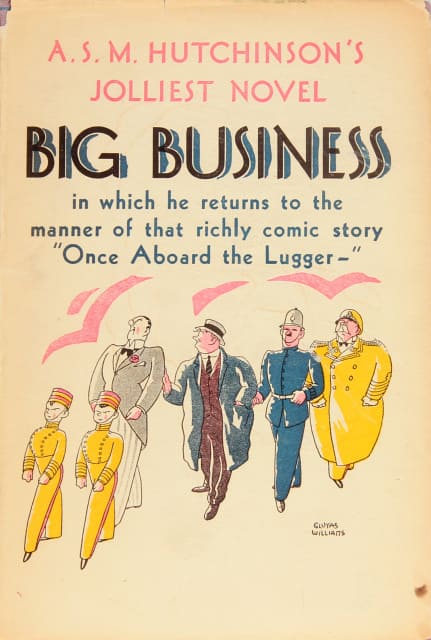 SKU:
$120.00
$120.00
Unavailable
per item
Hutchinson, A.S.M. Big Business. First Edition. 1932. Book and dust jacket are both in very good condition—there is a small tear to one of the pages, and jacket shows minor paper loss to the corners and a small chip to the upper spine. It is price-clipped. Illustrations by Gluyas Williams.

A.S.M. Hutchinson was the author of the most successful American novel of 1922. Involving divorce, unwed mothers, and suicide, it was shocking for its era. Ten years later, Hutchinson had enough of tragedy and turned to comedy in this delightful farce in which the protagonist develops a get-rich-quick scheme and then must deal with the chaos that results. Even the villains in this story come off rather well. Fun.
“The man who asks a lawyer to look into a will is like a man striking a match to look into the petrol line.”
--A.S.M. Hutchinson