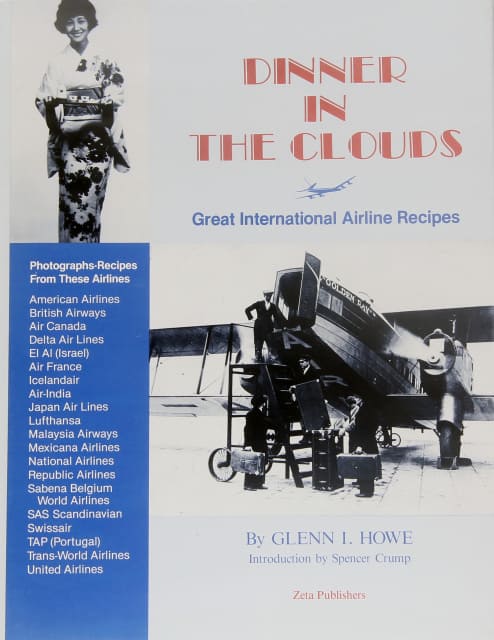 Dinner in the Clouds

SKU:
$75.00
$75.00
Unavailable
per item
Howe, Glenn I. Dinner in the Clouds. First Edition. 1985. Book and dust jacket are both in very good condition—there is a trace of fraying to the jacket.

In our century, it is difficult to disagree with Wolfgang Puck’s assertion that “an airplane is a great place to diet.” Yet in the 1960s, before the frequent flier programs ruled marketing, airlines were compelled to sink so low as to rely on the quality and sophistication of their cuisine to encourage repeat business. This author was a well-traveled gourmand who had been collecting recipes for many years. They are assembled in this thin coffee table book, which includes a treasure trove of air travel photographs from British Airways, JAL, TWA, United, Air France, et al.
“Ever since Napoleon Bonaparte declared that an army marches on its stomach, the French have been the world’s most distinguished chefs. The men who prepare gastronomic delights for Air France’s passengers are no exceptions.”
--Glenn I. Howe