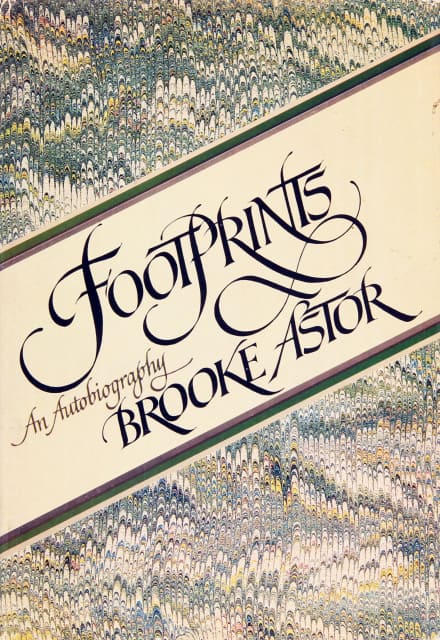 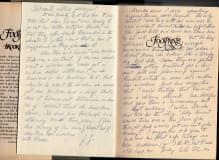 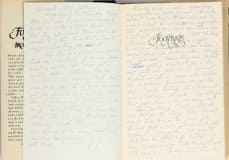 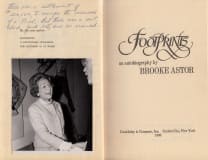 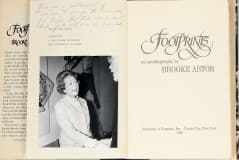 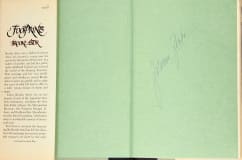 [Third Party Inscription by Jerome Zerbe; Possible Zerbe Portrait Tipped In] Astor, Brooke. Footprints, An Autobiography. First Edition. 1980. Book and dust jacket are both in very good condition. It is signed on the flyleaf, “Jerome Zerbe,” as if he were the author. The book also contains a three-page inscription by Zerbe in which he explains his connection to Mrs. Astor and gossips about the lawsuit Vincent’s half-brother brought against the Astor estate and how Brooke became the third Mrs. Astor. Tipped in is a b & w snapshot of Astor that was most likely taken by Zerbe.

With its lengthy inscription from the famous society photographer Jerome Zerbe, this is a most unique copy of the New York grand dame’s autobiography. Written when she was sixty, it turns out she was in early middle age.

“The French say ‘To know all is to forgive all.’ Well, one can never know all, and cannot in one’s heart forgive everything, but one can appear to do so, and then one eventually forgets.”

“Brooke and I were speaking acquaintances, never friends. The only contact I ever had with her was over an odd incident. Vincent hated his half-brother John Jacob Astor and never mentioned him in his will. Not too long afterward a couple announced themselves to one whom I didn’t know. She looked like a terrifying Bull Dike. Seems they were private detectives getting material for a lawsuit Jack was planning against Vincent’s estate as some 200 million was involved. Jack had suggested that I could testify that Vincent was a chronic drunk. I was horrified and gave them a resounding no!

Next morning I called Brooke and told her the story. ‘Why Vincent would turn over in his grave if he thought Jack would get one cent of his money.’ I suggested it be given to Jack and his first wife, Tucky’s son Wm. Backhouse (yes!!) Astor but Brook still said no. Tucky later told me there was a settlement of $250,000 to escape the scandal of a trial. But there was a suit, which Jack lost, and no scandal.

Servants stories perhaps! At one twenty East End Ave. It was told that when Vincent was ready to go out his butler notified Brooke, so that they often found themselves in the elevator to-gether and that is how it happened, as they planned it.

When Min [Minnie Cushing Astor Fosborough] and Vincent were married there was a contract. If Minnie should want a divorce she would get a million dollar settlement, as she received on her marriage to V. But should he want the divorce she would get one million and a half. That is how it turned out. Minnie asked me if I didn’t think she had been clever. She and Jim Fosborough [sic] had already make their plans (Jim had money of his own.) Vincent had for some time been involved with Brooke. J.Z.”