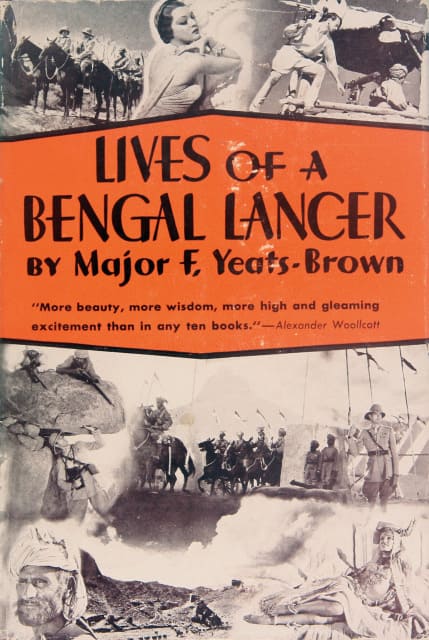 Lives of a Bengal Lancer

SKU:
$65.00
$65.00
Unavailable
per item
Yeats-Brown, Major F. Lives of a Bengal Lancer. Photoplay Edition. 1935. Book and dust jacket are both in very good condition—previous owner’s bookplate is attached to the flyleaf.

Do not be taken in by the swashbuckling theme of the dust jacket cover. It depicts scenes from the Hollywood adaptation of the author’s best-selling memoir of his life in the British military, most of which were spent in India. However, it was a story very difficult for Hollywood to use, because his is not the typical experience of the English colonialist. The Major’s adventures took him not only around the world and deep into the Subcontinent but also inside his own mind, as he explored yoga and Eastern mysticism.
“Time is nothing in India. Karma rules all, and the belief in its influence is infectious.”
--Major F. Yeats-Brown