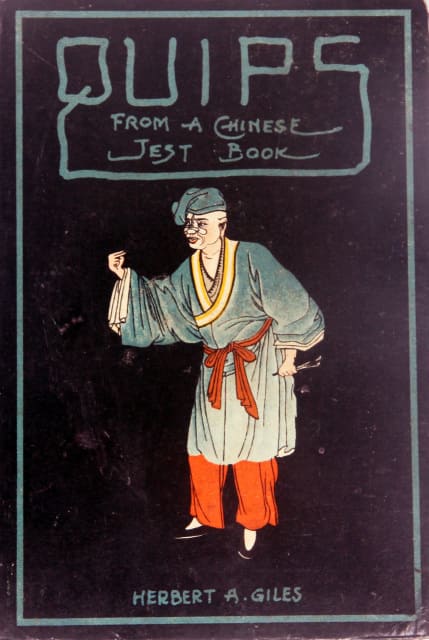 Quips from a Chinese Jest Book

Giles, Herbert A. (transl.) Quips from a Chinese Jest Book. First Edition. 1925. Hardcover in pictorial boards (no dust jacket). It is in very good minus condition—book shows bumped corners and moderate shelfwear. Previous owner has written “B. Roberts, Hong Kong” in the upper corner of the flyleaf.

Herbert Giles was at the forefront of late 19th and early 20th Century Chinese studies. He was one of the first professors at Cambridge to teach Chinese languages, and he was later stationed as a diplomat in China. He wrote works on Confucius and Lao Tzu, and he modified the Romanization system of Mandarin Chinese. This book is one of his more accessible and lovely. Its intent was to showcase “the wit and humour of the Chinese” and shed light on their doings, sayings, and thoughts.

“A wealthy man said to a very miserly fellow, ‘I will give you a thousand ounces of silver if you let me beat you to death.’ The miser thought the offer for some time and then replied, ‘Make it five hundred ounces, and beat me half to death.’”

--Quips from a Chinese Jest Book