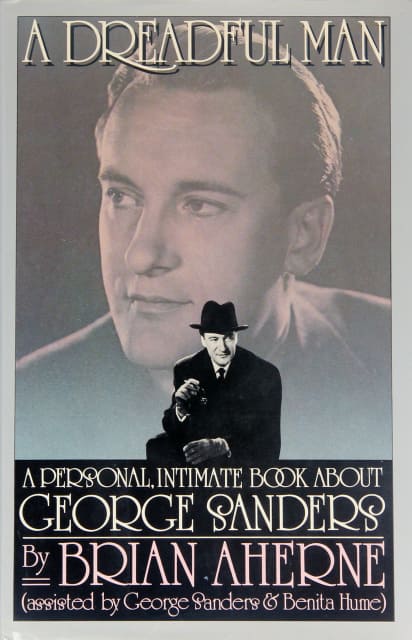 A Dreadful Man, A Personal, Intimate Book About George Sanders

Aherene, Brian. A Dreadful Man, A Personal, Intimate Book About George Sanders. First Edition. 1979. Book and dust jacket are both in very good condition—there is a small stain to the page edges and flyleaf.

When Brian Aherene was contemplating writing his life story, his best friend George Sanders advised that a catchy title was everything. Little did Sanders realize that Aherene would follow that advice when writing a book about him. Had Sanders been alive, however, he would have considered “dreadful” to be humorous, not offensive. This story concerns not only Aherene and Sanders but also the famed British Colony in Golden Age Hollywood. Some of the story is excerpted from Sanders’ own words and also the letters of his wife Benita Hume (who was first married to Ronald Colman).

“I am committing suicide because I am bored. I feel I have lived long enough. I leave you all in your sweet little cesspool and I wish you luck.”