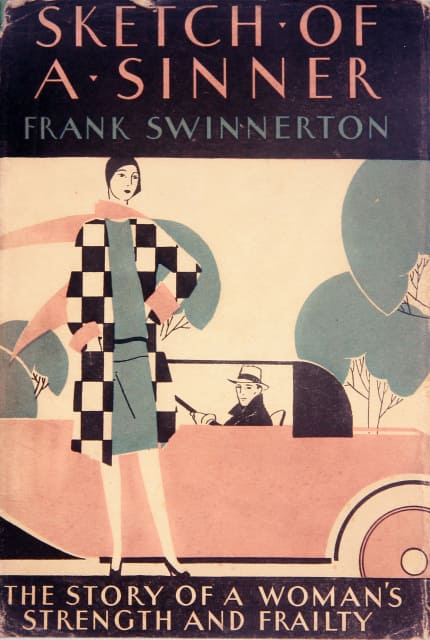 SKU:
$75.00
$75.00
Unavailable
per item
Swinnerton, Frank. Sketch of a Sinner, The Story of a Woman’s Strength and Frailty. First American Edition. 1929. Book is in very good condition; dust jacket is in good plus condition—jacket shows mild fraying, light soiling, and some discoloration to the spine. Jacket illustration by Morris of Paris.

In addition to writing novels, Frank Swinnerton was also an editor at Chatto & Windus, where his roster included Aldus Huxley and Lytton Strachey. The protagonist of this novel set in London is a Lydia, a woman who has difficulty remaining faithful to her much-older husband Sebastian. It is told from her perspective. And, she judges herself much more harshly than does the author.
“’He’s fifty-four! It’s old. He’s old. I’d like to see the world. I’d like to see and do all sorts of things I never shall. Why can’t I? Why shouldn’t I?’ The exaltation passed with terrible rapidity. Lydia knew that the reason lay, not in Sebastian, as her impulse declared, but within herself.”
--Frank Swinnerton